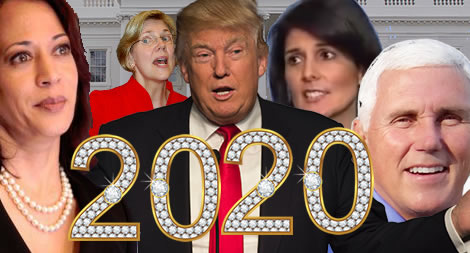 It may seem years away in mere mortal time, however in political times the 2020 elections are just around the corner. The U.S. will choose a President, 435 Representatives and 33 Senators on November 3rd, 2020. If you thought the 2018 election is going to be crazy, you might want to pickup a large roll of aluminum foil in order to get through 2020.

Whether you’re a Democrat or Republican, you’ll have something to look forward to and worry about election year.

Where To Bet On 2020 Elections

President Trump Runs For Reelection in 2020?

President Trump could face a contested primary (think John Kasich), The Democrats might get their own case of Clinton Derangement Syndrome) and Ted Nugent could be a United States Senator.

If Donald Trump is President in 202o, odds are he’ll run for reelection.  Of course, we could have a President Pence running for reelection come campaign time.  If Pence is the nominee in 2020, it’s going to be a long fall for Republicans.

To add to the confusion, if President Trump runs for another term he’s likely going to be challenged in a heated primary that could further divide the Grand Old Party.  With a scenario like that, it could be a crazy primary on the right.  The possibilities are endless.

If Trump manages to work his way through the minefield of an impeachment and a Republican challenger, I’d wager that he’d be strong enough to win reelection in 2020.

No Democrat has emerged yet that has the hops to take on President Trump, and those that are making noise have ties to Secretary Hillary Clinton. The 2020 Elections could be chaos for the Party of Andrew Jackson.  Chances are we’ll see as many Democrats running in 2020 as there were Republicans in 2016.

Current Virginia Governor Terry Mcauliffe may be an early frontrunner for Democratic nominee.  He’s got the experience.  Mcauliffe can raise money and he looks and sounds good on TV.  He also has long ties to Bill and Hillary Clinton.  Considering that a Republican Congress is right now still investigating the Clintons, this could drag him down.

Of course, there are other candidates that could come out of proverbial nowhere and take the Dem nod.  Tamela Harris could excite the Obama coalition.  The Freshman Senator already has a whisper campaign and has taken a pro-Bernie stance on healthcare.

President Trump is in a precarious position.  Whether he kowtows to his base or reaches out to mainstream Republicans, he’s going to upset someone.  Because he’s so polarizing, he’s always on the edge. President Trump has lived life on the edge for his entire life, and it’s paid off handsomely so far.

If Trump’s mojo changes, however, there’s a chance that even his base turns on him.  I think that’s highly unlikely that this would happen. I’m one of those chumps that thinks Trump COULD shoot a man on 5th avenue in New York and not loose a vote.

If Trump heads into the 2020 elections with only the support of his base, the Presidential election will be all about who gets the turnout.  In contrast, if President Trust gets a few major legislative victories and the economy continues to grow, his reelection could be a cakewalk.

The 2020 Senate Elections Could Be A War

Right Now (as of this writing) the Republicans control the Senate with basically a 2 (or 3 in case of a tie) seat advantage.  However, before 2020 comes, there will be 33 Senate seats up for grabs in 2018.  Of these, only 12 appear to be remotely competitive, and only 2 of those are in Democratic stronghold.  Its possible, that the Republicans could actually gain enough seats to have a super-majority. I’d predict that even in the kind of turnaround we saw in 1994 with “Contract With America“, won’t yield a Democratic majority in the Senate in 2018.  However, I don’t think The Republicans will earn a super-majority either.

In 2020, however it’s a different story.  Using my analysis of the 2020 Senate Elections, Betting Trump predicts there will be 11 contested Republican seats in 2020 that the Democrats could win. With as few as 1 competitive seats up that The Democrats control, and Donald Trump possibly up for reelection in 2020, his popularity will likely control who wins the Senate. If Trump wins in 2020, Republican Senate candidates will too.

The House Of Representatives elect all members every 2 years. Because the seats are more local, it’s impossible to know who’ll have control after the 2020 elections.  Of course, if the economy is still rolling, and Trump is even moderately successful, chances are strong the G.O.P. will retain control in 2020.

Since Republicans controlled both the National and most State Houses in 2010, they have a favorable electoral map to work with.  In 2020, redistricting is up again.  The shape of Congressional districts throughout the nation are at stake, and both parties take this very seriously.  That’s why both parties will be working extra hard to win the cycle.  That’s because the winner in 2020 will likely have better odds of controlling the government’s direction for the next decade.

The 2020 Elections Will Be An Epic Shoot-Out

President Trump will face reelection.  The Senate will have a decent chance of changing hands.  District redrawing hangs in the balance.  Did I mention that Donald Trump will be on the ballot? The 2020 elections will be like the World Series, Superbowl and NBA Finals all happening at the same time. Billions will be spent to curry favor for one candidate or another.

If you’re looking to wager real money on the 2020 Elections, make sure to visit one of our recommended online bookmakers.  Bovada, BetOnline.ag and Intertops are all reputable, 100% legitimate online political betting destinations.  Put your money where your clicker is!