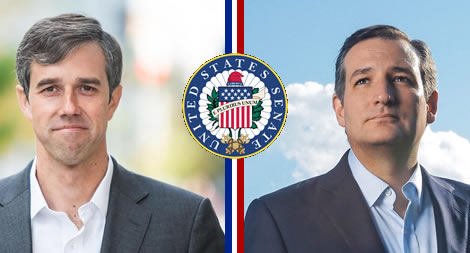 Some of the biggest news in the 2018 election cycle has revolved around perennial red-State Texas.  Believe it or not, the Texas Senate election is as close as its been in a generation.  Worldwide betting houses are getting into the action, and maybe even you want to bet on the Texas Senate race.  Whether you’re rooting for incumbent Ted Cruz (R), or challenger, Beto O’Rourke (D), putting your hard earned money on the line might not be as simple as who you want to win.  When you’re putting money on it, you want to pick who you think WILL win.  We’re going to lay all the info you should need to make the right decision.

You Can Bet On The Texas Senate Race

Many online sports books offer wagers for  the 2018 Senate Race.  If you’re looking to get a couple of good sportsbooks that allow US players to bet on politics, we recommend Bovada, BetOnline and Intertops.  All three are legitimate, 100% safe online sports books that will pay out to American players and accept credit card deposits.  If you’re serious about betting on the Texas Senate race, and live in the United States, these are your best options.  We’ve done extensive reviews on Bovada, BetOnline and Intertops, if you want any information on any site we recommend.

If you are here for more information to help you make the best decision, let’s look take a quick look at both candidates..

Cruz Vs O’Rourke: Who Will Be Triumphant

Ted Cruz is a conservative Republican who flew into the national spotlight during the 2012 Elections.  He ran for President in 2016, and was the runner-up in the Republican Presidential Primary. Before the Senate Cruz served as State Solicitor General, Assistant Attorney General, and was a domestic Policy advisor in President George W. Bush’s administration.

Cruz’ opponent, Beto O’Rourke is a former El Paso councilman, and the current U.S. Representative for Texas’ 16th Congressional district.  Before his City Council experience, he owned a web development company in his home town.

Who Should I Wager On if I Bet On The Texas Senate Race?

First, lets take a look at what the bookmakers think.  Our top Recommended Sports Book, Bovada currently shows that current Texas Senator Ted Cruz has a 67% chance of retaining his seat.  With odds set at -200, that means if you bet $100 on Ted Cruz’ victory, you’ll win $50 if he does. 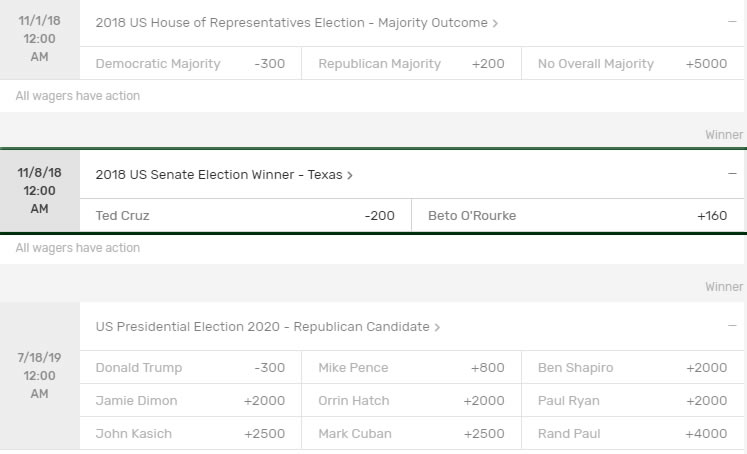 – Click here for the most up to date odds

On the other hand, if you wager that same Benjamin on challenger Beto O’Rourke, and he somehow pulls if off, you’d win $160.  Either way, the winner gets his (or her) initial wager back.

Although the smart money is on Ted Cruz, polls have been closing lately, and the possibility of a seat flip are higher than they’ve been in years. Sometimes, a good gambler will go with the 2 to 1 odds hoping for a big pay-out.  You may be tempted to let it ride on O’Rourke, simply because an upset means one helluva payday.

If you’re serious about wagering on the 2018 Texas Senate Race, our #1 top recommended sports book is Bovada. Like all the casinos we recommend, Bovada is 100% safe and legitimate, and they will pay you when you win.  Read Betting Presidents’ review of Bovada Here.