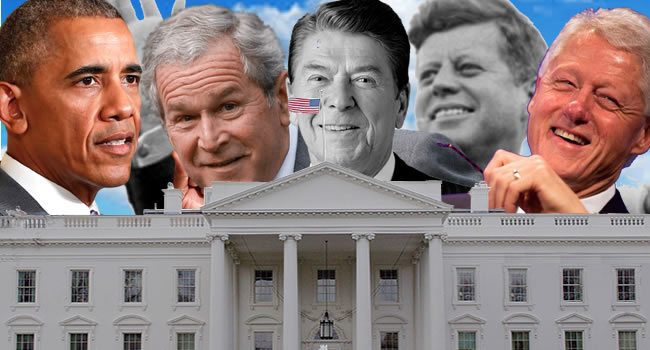 Democrats, on the other hand, will never agree that taxes should be cut.  They never work, they say. Democrats argue that any tax cuts Republicans propose only benefit the rich.  Wealth never trickles down they’ll argue.  Democrats hate tax cuts.

The 2018 election and 2020 election could see tax policy as a major issue.  What are we to think?

Tax Cuts Help The Economy? What the data says

So who’s right? How do tax reductions affect the economy?  I thought I’d take a look at 3 of the most recent, largest tax cuts in The United States and see what happened afterwards.

Newly inaugurated President George W. Bush signed The Economic Growth and Tax Relief Reconciliation Act of 2001, when  the 39.6% tax bracket was be lowered to 35% ,  The law was signed in June 2001

The so-called Kennedy Tax cuts was the Revenue act of 1964 that was signed into law in 1964 by President Johnson.  They cut the rate by 20% across the board. – Source

Based on the data laid out above, it appears evident that the best argument that tax cuts help the economy the most is the Revenue act of 1964, the so-called Kennedy Tax Cuts.  Unemployment fell, wage growth was high, and the debt only ticked up .08% during the next decade.

Now that we’re neck deep in the tax data, I thought we should compare the affects of tax increases to the results found for tax cuts above.

Clinton’s Omnibus Budget Reconciliation Act of 1993 created several new brackets at the top of the income scale, and increased income taxes on anyone making more than $115,000 a year.

In 2015, President Obama signed the American Taxpayer Relief Act of 2012, which reinstated the Bush tax cuts after a 6 month repeal.  Obama did manage to raise taxes however, on a broad range of items.  – Here’s a list – Source

In the scheme of things, this battle is a wash.  You could give a slight advantage to Tax cuts, but these numbers are very evenly matched.

So this one’s a little clearer.  Debt soared under both, however Obama’s unemployment and wage growth numbers are significantly better.  Not that 1% is a barn burner, but considering his term started with negative 4% wage growth, it increased 5% during his 2 terms.

So what conclusions can we make from this data?  I’ll offer my hypothesis and you can feel free to comment yours below.

I believe that neither tax cuts or increases significantly impact the overall economy. In my opinion, it’s more about spending.  The “Kennedy” cuts for example went into effect right before Johnson’s Great Society program, which increased government spending on services for working class people.  Medicare, Medicaid, welfare were established, high-speed trains were built and investments made in art and education were made.  The Bush era, in comparison saw virtually no domestic spending increases, save the failed medicare reform.

Whatever you believe about taxes, this intricate look at data likely won’t change your mind.  Many people feel its a moral, ethical and social issue that’s based more on opinion and instinct rather than data.