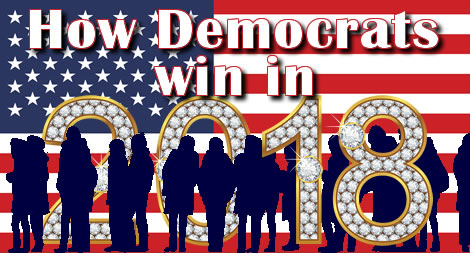 There are hundreds of posts going over which seats in which states will go which way in the 2018 elections.  They’ll talk about how hard the Senate is going to be to win.  The open seats favor Republicans, they say.  I’m not going to do that here. Instead, lets talk about the real way Democrats win in 2018.

The 2018 election will be won by one and one thing only.  Voter turn-out.  I’ll let other people analyze the data based on past elections and what districts need what, but the simple truth is that if we can get people to vote like its a Presidential election in 2018, Democrats will win big.

The reason we have a President that was elected with a not even 40% favorable rating is turn-out, and the Democrats lack thereof.  It’s easy for Republicans to keep turn-out up.  They made their fight biblical, about the life and death of this nation, with a clear enemy;  The Democratic Party.  Basically, they scare their voters to the polls.  They want to make sure Democrats don’t win in 2018.

If we want to help Democrats win in 2018, It’s time to stop arguing with Republicans about facts.  They stopped caring about them years ago, and they always whatabout you to the point of abandonment. I ingest a lot of conservative media, and I can never keep up with the crazy conspiracy theory of the week, and they’ll never walk away thinking about anything any differently.

The real problem is that we can’t convince enough people who agree with our position to vote.  The closer to 100% turn-out we come, the more Democrats win elections.  There’s a reason it’s just Republicans that want to constantly decrease voting rights. When people vote, they loose.   Voter turn-out will be a key to helping Democrats win in 2018.

So maybe we should stop trying to argue with people we don’t agree with.  We’re not changing their minds anyway.  I think right now what we need to do is concentrate on the people we agree with.  And we need to make sure they come out and vote in 2018 like its 2020.  Candidates need to tell the people how they’ll help and not be afraid of progressive policies. Stop worrying about demographic politics and concentrate on people we’ve had all along, but maybe just didn’t pay attention to.

Democrats can worry about changing minds once they’re in control of the Government and are helping people improve their lives.  We don’t need them right now. We’ve got enough on our side to win already if we can just get them to vote.

If Democrats vote, they win.  It’s as simple as that.

Hi I'm The Notorious CDG, this is my website and I like to bet on politics. You can bet along side me at my favorite political betting site Bovada . If you sign up now you can get up to a free $250 bonus. Learn more about Bovada here in in my review or see my short list of best political betting sites for USA here.