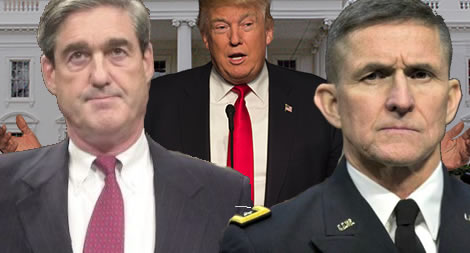 With the latest news that General Michael Flynn’s attorneys are no longer cooperating with President Trump’s lawyers, is it possible that Special Prosecutor Robert Mueller is closing in on The President’s inner circle?

I think it’s very possible.  And it may come sooner, rather than later.

Word last week came down that Mueller already had enough evidence to arrest both Flynn and his son Michael Jr.  A threat against one’s son would  give any father pause.  Most would be willing to take the fall for their Son, and the two are very close, by all accounts.

It seems undeniable that General Flynn, a Trump advisor from the campaign’s inception, could be indicted.  He failed to register as a foreign agent  when he worked for the Turkish Government during the 2016 campaign.  He lied about several contacts with other foreign Governments, including Russia and there’s even the weird (unsubstantiated) story about Flynn Kidnapping a Turk in New Jersey and sending him back to Turkey.

Son-In-Law-In-Chief Jared Kushner is also likely to have troubles with Mueller’s investigation.  He lied  about meetings with foreign Governments, and I believe there will be many more revelations about Kushner and Russian Oligarchs.

I realize President Trump won’t read this. It’s not like he’s going to start reading things now.  But if anybody that has his ear happens up on this post, all I ask is you play The President this video.  Mueller’s watching Trump, and the walls are starting to close in.