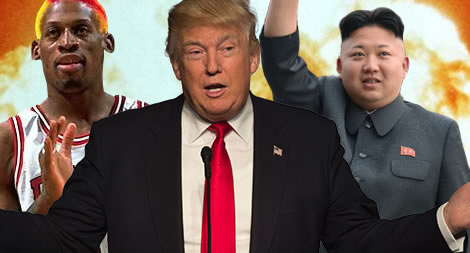 If Kim Jong Un and President Donald Trump really are in the middle of a pissing contest on steroids, does that mean he thinks that a war, (or at least the threat of war) with North Korea could save his Presidency?

It honestly might just be his best bet at keeping his job.  At least for now.

People don’t want to switch horses in midstream, and an actual hot war on the Korean Peninsula would more than likely give The President some breathing room.  Everybody is going to want Trump to concentrate completely.  Seriously. 100% concentration.  Mueller and his boys would lay low for a while, giving the President time to try and rebuild his image in the form of a warrior.

A hot war with North Korea would likely give President Trump some room to maneuver.  It it, however, only a temporary halt to momentum.  Even if the war isn’t over soon, the American People are going to learn more about the Russian connection, and Commander In Chief Pence might start to have a nice ring to it.  That doesn’t take into account the possibility of a Trump mistake causing a military showdown, and war with North Korea could hasten any Trump impeachment action.

If Trump brings in Dennis Rodman as a top advisor, all bets are off

Bottom Line:  North Korea will most likely not save Trump’s Presidency.

Trump alone can save his Presidency at this time. Nobody knows what he knows except him. It’s very possible that if he thought that a war with North Korea would get him a 70% approval rating he’d do it for sure.  I don’t think that would happen.  People have made up their mind about Donald Trump. No war is going to change that.

Surely President Trump has advisors telling him this.  Sure he’d get a little bump for a week or two if things go well.  People aren’t going to get over Russia though. No matter what he says or does, that’s not going to change.