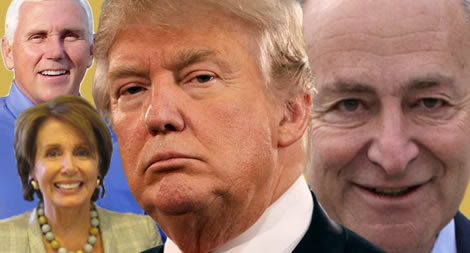 News broke last night that Senator Chuck Schumer and Representative Nancy Pelosi had brokered a deal with President Trump that would codify D.A.C.A. and nix the border wall.  Sources let it slip that in return, the Trump administration will get enhanced border measures that would strengthen immigration policy for those here illegally.  I’d like to know if this move will help quicken a possible Trump Impeachment.

Firstly, look at the base. Rush Limbaugh today had trouble defending President Trump’s deal.  Without the base, I’ve long said, Trump won’t last long.  The theory stands among politicos is that he’ll remain in office, if he maintains approval ratings around 35%, . I, however, think who that 35% is much more important than that figure itself.  The Trump supporters must sustain a solid block that keeps Republicans in trouble if they go for Trump Impeachment

When I listen to conservative talk radio, which is every day, I hear this.  The only thing Conservatives hate more than Democrats is Republicans.  “It’s Paul Ryan’s fault Trump hasn’t gotten anything done”, they say. “John McCain sold his soul to Chuckie Schumer because he has brain damage”, I hear.

So why can’t the mainstream Republicans, who conservatives thinks run things, go ahead and Impeach the President?  Mike Pence wouldn’t work with Democrats.  The Vice President doesn’t twitter storm.  He tolls the party line on defense and generally globalization.

I don’t care if President Trump’s approval ratings rise to 45%.  If 25% of those are Democrats, he’s as good as Impeached.